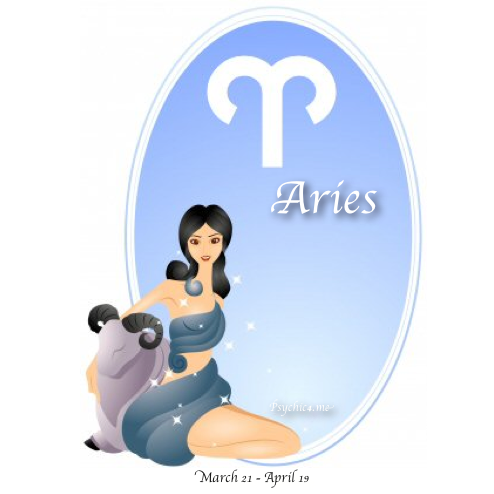 It's no wonder that Aries is the first sign of the zodiac, for this is the sign of the leader.

Aries, you are symbolized by the powerful Ram, which was known throughout history to depict wealth and courageous commanders.  It is the ram's horn that is used to create the cornucopia, also known as the "horn of plenty", and this signifies abundance to those born under this sign.  Ancient Egyptians worshipped the fertile Ram as one of their most important and holiest gods.  Rams were used as oracles in the temples of ancient Egypt. Aries, you are the accomplisher, the pioneer and a natural born leader.

Your ruling planet is Mars, named for the Roman God of War, who is known to be fearless, energetic and aggressive.  Those born under this influence are fierce competitors and usually win any challenge they choose to engage in.  Mars energy is strong, brave and swift.

Your element is Fire which speaks of the burning passion you exhibit in all areas of your life.  This element indicates pure energy with a great faith in one's own competency which gives power to your exceptional leadership abilities; although this great confidence may sometimes be mistaken for arrogance.  You have a natural generosity and share both your finances and your time.  Fire signs exhibit honesty and warmth.

Tuesdays are your luckiest day of the week with noon as your luckiest hour; your numbers are ones and nines. Red, the color of your ruling planet is also your color, and your astrological birthstone is the diamond, which derived it's name, during the bronze age of ancient Greece because this stone was considered the hardest metal.  Adamas is the origin of the word, adamant in English.  The flowers associated with Aries are the happy daisy, the aromatic sweet pea and honeysuckle.

Back to Aries Lovescope